In an SF6 circuit-breaker, the current continues to flow after contact separation through the arc whose plasma consists of ionized SF6 gas. For, as long as it is burning, the arc is subjected to a constant flow of gas which extracts heat from it. The arc is extinguished at a current zero, when the heat is extracted by the falling current. The continuing flow of gas finally de-ionises the contact gap and establishes the dielectric strength required to prevent a re-strike.

The direction of the gas flow, i.e., whether it is parallel to or across the axis of the arc, has a decisive influence on the efficiency of the arc interruption process. Research has shown that an axial flow of gas creates a turbulence which causes an intensive and continuous interaction between the gas and the plasma as the current approaches zero. Cross-gas-flow cooling of the arc is generally achieved in practice by making the arc move in the stationary gas. This interruption process can however, lead to arc instability and resulting great fluctuations in the interrupting capability of the circuit breaker. 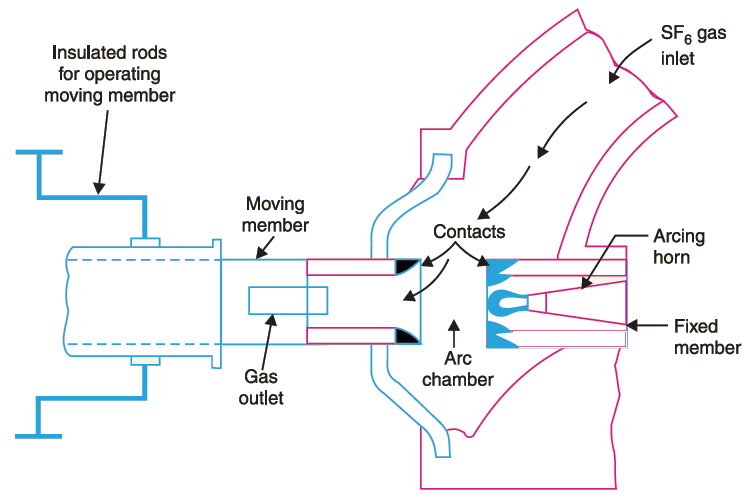 In order to achieve a flow of gas axially to the arc a pressure differential must be created along the arc. The first generation of the SF6 circuit breakers used the two-pressure principle of the air-blast circuit-breaker. Here a certain quantity of gas was kept stored at a high pressure and released into the arcing chamber. At the moment high pressure gas and the associated compressor was eliminated by the second generation design. Here the pressure differential was created by a piston attached to the moving contacts which compresses the gas in a small cylinder as the contact opens. A disadvantage is that this puffer system requires a relatively powerful operating mechanism. Neither of the two types of circuit breakers described was able to compete with the oil circuit breakers price wise. A major cost component of the puffer circuit-breaker is the operating mechanism; consequently developments followed which were aimed at reducing or eliminating this additional cost factor. These developments concentrated on employing the arc energy itself to create directly the pressure-differential needed. This research led to the development of the self-pressuring circuit-breaker in which the over – pres

sure is created by using the arc energy to heat the gas under controlled conditions. During the initial stages of development, an auxiliary piston was included in the interrupting mechanism, in order to ensure the satisfactory breaking of small currents. Subsequent improvements in this technology have eliminated this requirem

ent and in the latest designs the operating mechanism must only provide the energy needed to move the contacts.

Parallel to the development of the self-pressuring design, other work resulted in the rotating – arc SF6 gas circuit breaker. In this design the arc is caused to move through, in effect the stationery gas. The relative movement between the arc and the gas is no longer axial but radial, i.e., it is a cross-flow mechanism. The operating energy required by circuit breakers of this design is also minimal.